Our three small houses in Harja in the Carpathian mountains in eastern Romania give:

The first children came to us out of the notorious orphanages of the Communist regime. These children are now grown up, at university and in training, beginning to make lives of a kind they might never otherwise have hoped for, but often still dependent on our emotional and financial support. Sadly, we are under constant pressure to take in new children, babies and toddlers whose parents have abandoned them or are unable to look after them. We do this in cooperation with the regional Department of Child Protection.

Please help us to give these children the chance they deserve in life.

Our three eldest children have all passed their final school exams, taken during lockdown. Two of them, Ali and Diana, are applying to universities. Albert, strongly influenced by his upbringing, is interested in social assistance, and also in construction.

Diana is applying to do communication and foreign languages at Bacau University. She is a happy girl with a good sense of humour.

Georgiana has had enough of studying for now and plans to go to England with her boyfriend. She was a very good student. Now she wants freedom and no rules!

As we celebrate their success, it’s a time to reflect on how Friends of Children in Romania has helped them grow and given them stability, love and encouragement after very difficult beginnings.

Ali was brought to Harja from the maternity ward in the city of Arad when he was six months old. His mother had left him after his birth. He got in touch with her two years ago, but no relationship could be built up. He met his parents last Christmas but was very disappointed and said: ‘I realise now how lucky I was to be raised in Hârja by the charity and to have the love and affection and care of Mary and of all the staff involved.’

Diana came to Hârja when she was eight months old, after her mother died from an infection. She came with Lidia, her sister, who is now a graduate and lives in Cluj.

Georgiana was two years old when she came to us. Her mother took her to Child Protection as she had nowhere to live and they were sleeping in a park. She kept in touch for a few years until she went to live in Italy but it was never a close relationship.

Since their exams, all the children have been enjoying summer activities such as picking cherries and fishing. The older children ones have now returned from a well-deserved camping holiday in the Eastern Carpathians, paid for with money refunded to us by the transport authority, as a result of lockdown schooling.

Many thanks to all those who support Friends of Children in Romania.  If you would like to make a donation or take out regular Direct Debit payments to support us, you can do so securely here. 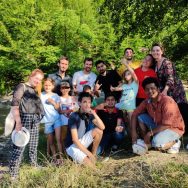 Here we are representing a glimpse of the Friends of Romanian Children’s association houses.

Friends of Romanian Children was founded by Mary Gibson, a mother and grandmother

herself, who was so disturbed by the images that came out of Romanian orphanages after the 1989 revolution that she flew there to help, initially raising funds and sending out workers, eventually setting up the Friends of Romanian Children project to give these children love and a family life.

Experiential Learning Forum re-Edu Project involves volunteers from all over the world in intercultural interactions and creative activities with the purpose of improving the community and bringing self awareness to both children and adults.

We asked the children about their life, future plans and beautiful memories. Watch their answers from the video below and embrace the happiness and the warmth that they send to everyone around.